I’ve never been to V Festival before so I had no idea what to expect as we went for both days and we were camping there. The only UK festival I’ve been camping to, was Reading and Reading is like a second home for me, literally. This year we’re going again and I can’t wait.

If I should compare V and Reading.. Well, there’s many differences. But I’ll tell you more later. Now let’s see how those two days were for us.

V goes on on Saturday and Sunday so we were planning to get there on Friday, so on Saturday we would be all settled and we wouldn’t have to worry about anything else than getting drunk and enjoying the festival. But Friday was really rainy and actually the whole weekend looked like it’s gonna be raining so we decided to go on Saturday morning, just so we can stay for one more night in our warm and cosy bed.
1st DAY – SATURDAY

On Saturday morning me and my friend met on Liverpool Street, got our train tickets and hurray to Chelmsford. The train ticket was just 22 pounds with return which is so much cheaper than the traveling they were offering on the official site when buying a ticket. Train takes about 25 minutes and then you have to take a shuttle bus which is 5 pounds and it’ll take you straight to V. 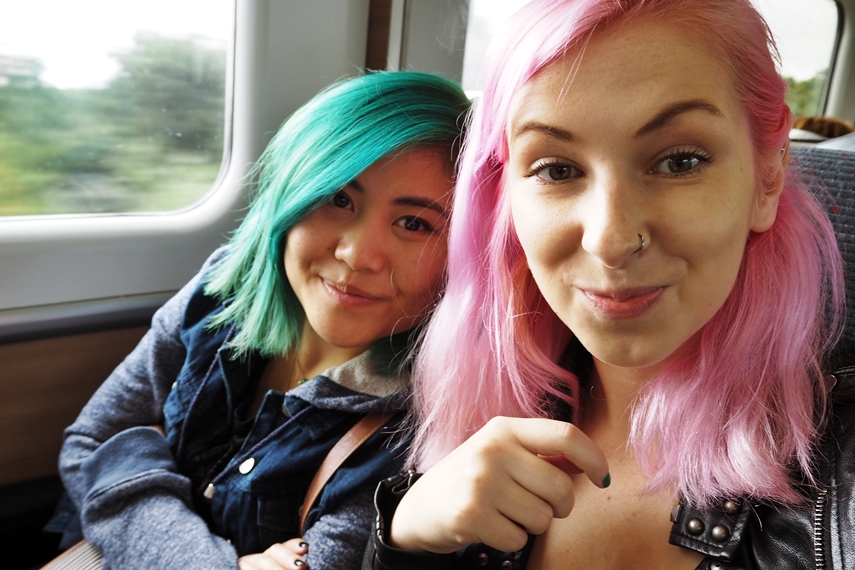 Once we got to the festival it started horribly raining. So before we found a spot to place our tent we were soaked in wet. Beautiful start of the weekend.
Then it stopped raining but it was still super windy so we were struggling with out tent for like an hour and no one even offered us a help like it happened on Reading last year. I seriously thought I’m gonna cry. I was wet, cold and all I wanted was the bottle of wine in my bag.

When we finally built our tent and it wasn’t flying away anymore it was the most beautiful feeling ever. And of course – suddenly it started to be a bit sunny. 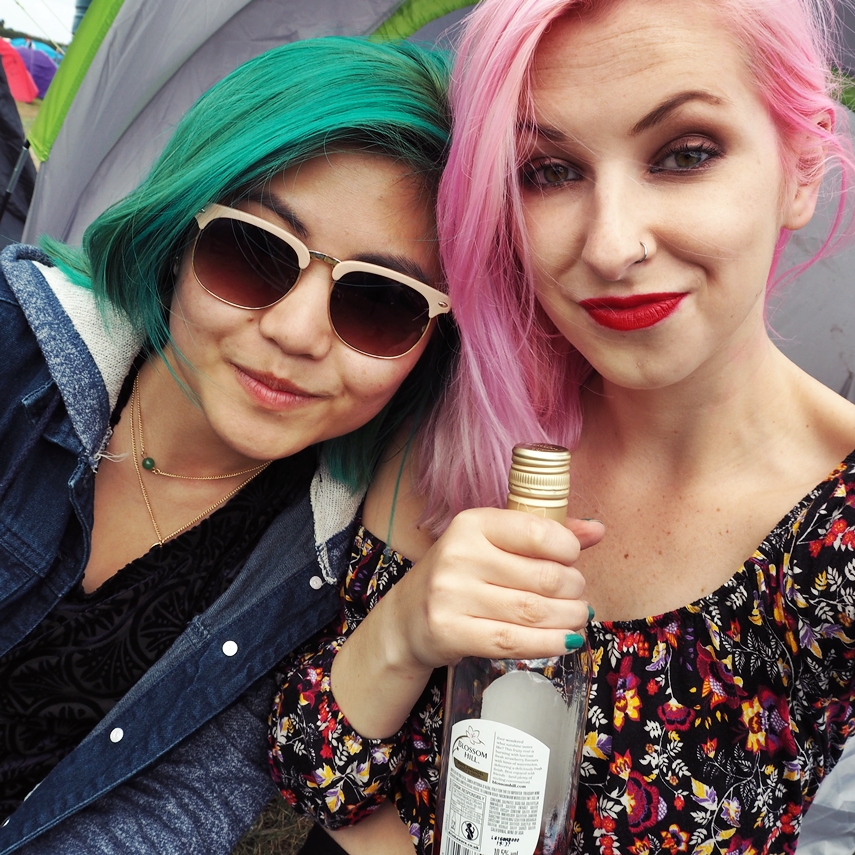 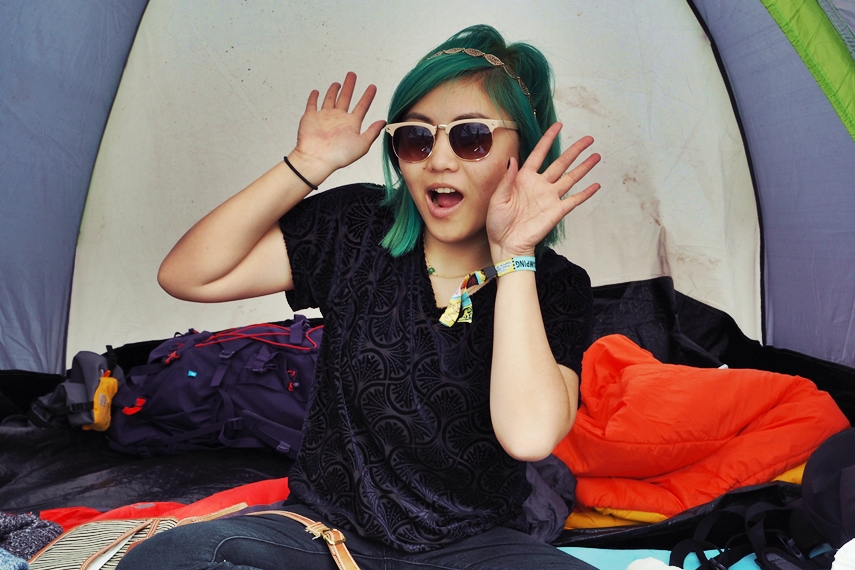 When I was sitting outside of the tent and watching people I realized this festival isn’t like Reading at all. All of those people were probably in their teens, girls were half naked no matter which body shape they were. We were the only people with colorful hair and the only people without a glitter on a face.
After few moments of chillin’ we got ready and started drinking. 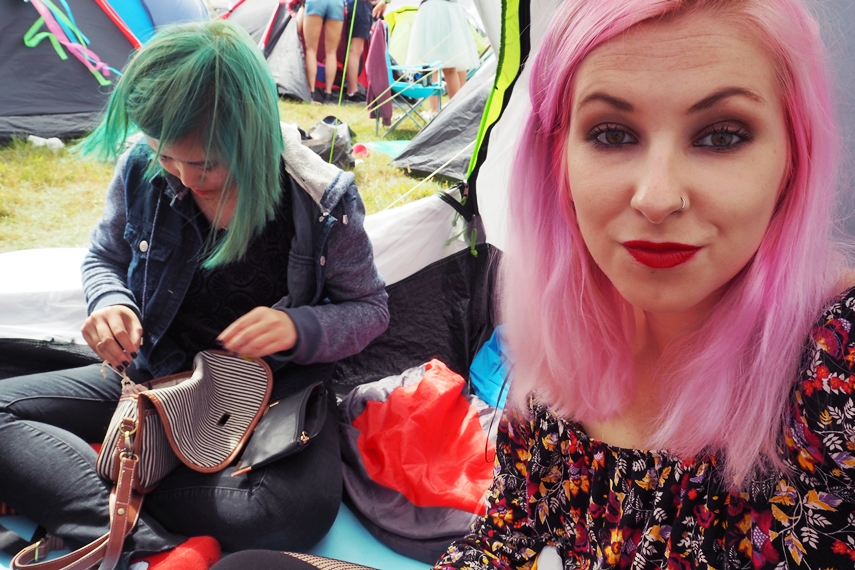 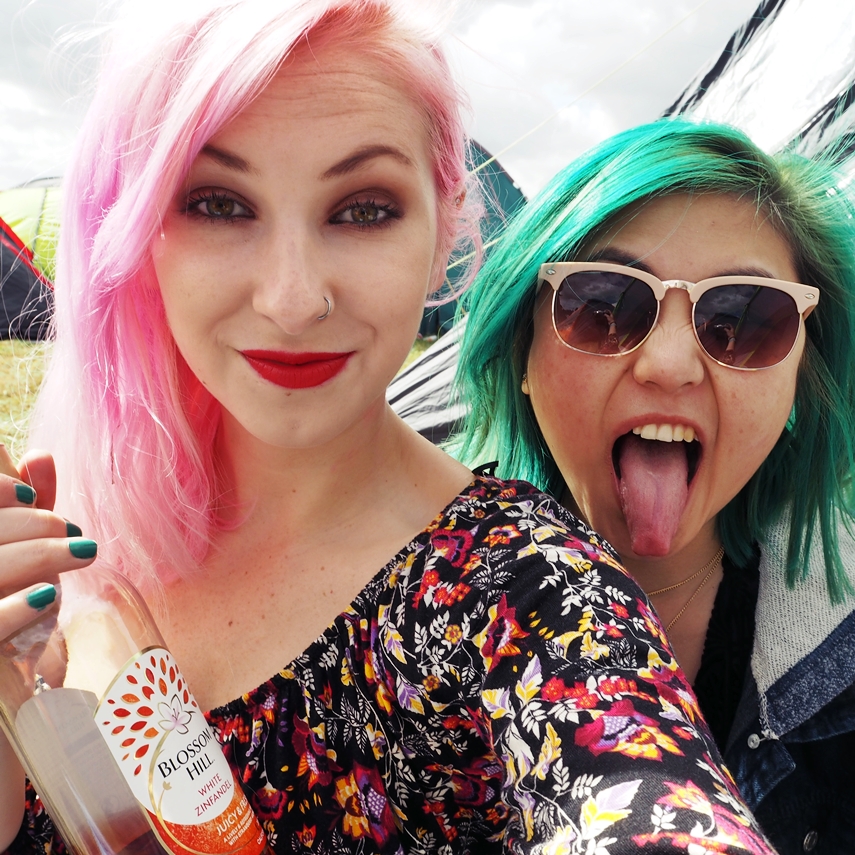 The first act we wanted to see was Jess Glynne. But only because of one song – Don’t Be So Hard on Yourself. And this song she played right at the beggining while we were in the queue for a beer. So after I got my beer there was no reason to stay as none of us knew any other songs.
So we went to MTV Stage wait for Troye Sivan. You have no idea how excited I was about seeing him. Since I discovered his music I was pretty much obssesed with him and couldn’t stop listen to him. And finally it was the time to see him live.

And he was absolutely incredible. His vocals are with no doubts so clear and he makes a great show 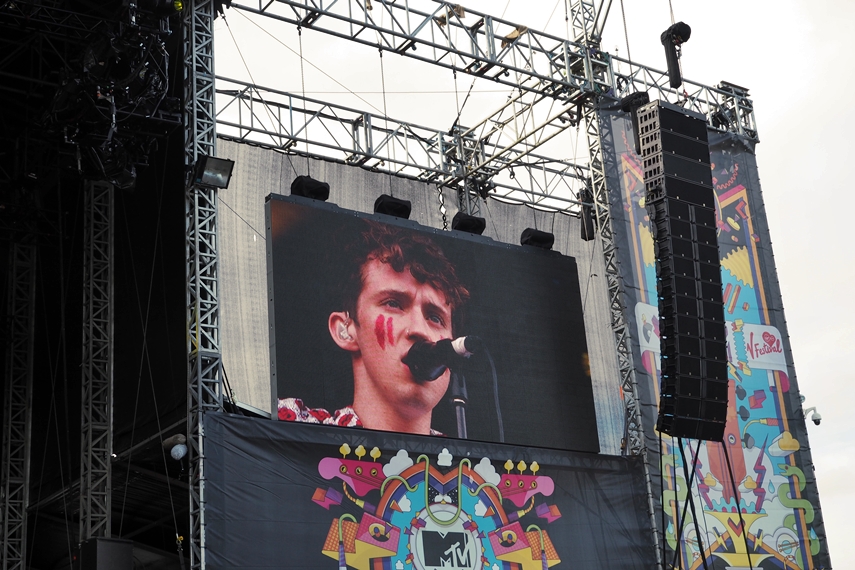 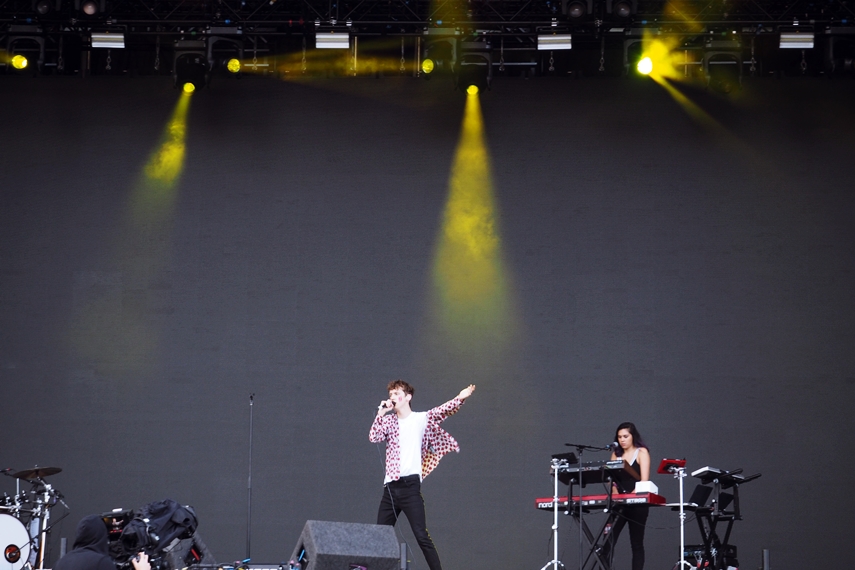 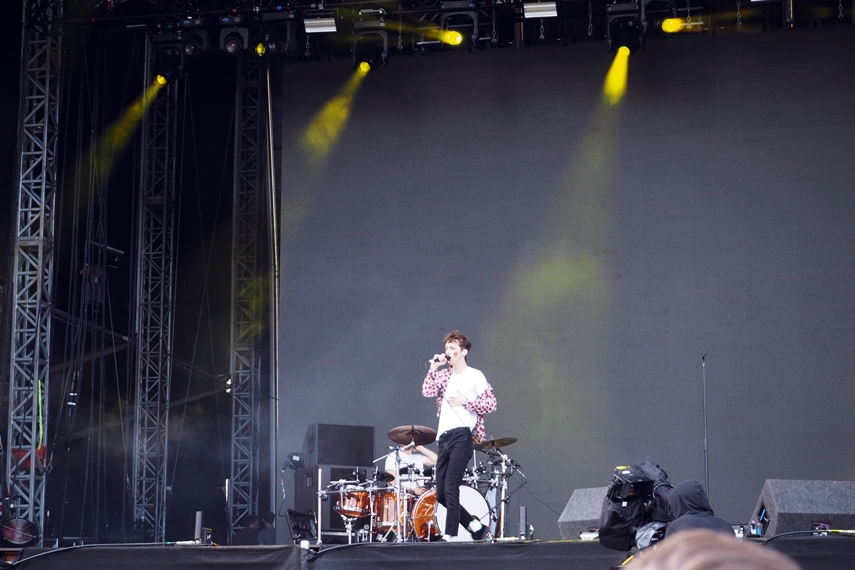 I don’t think I have to mention that he’s such a babe. He was definitely one of my favourite acts of the whole weekend. 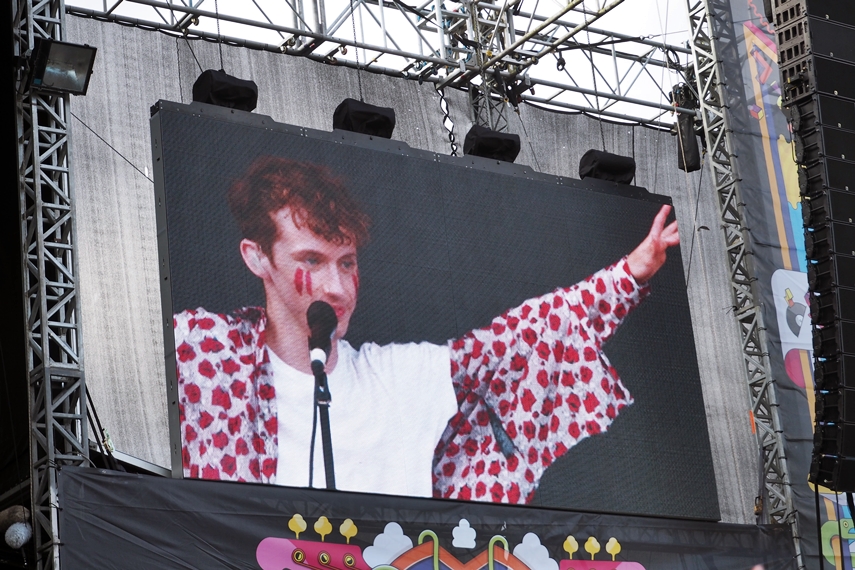 Right after him there was John Newman playing. I’ve only seen him with Ellie Goulding on her charity show last year (read HERE ) and he only played few songs so I defnitely wanted to see him again. After Troye many people left so we got into second row, yay! I like John. I think he has really interesting voice and his moves are just incredible, but his music is not something I would have on my playilist. Apart of Blame with Calvin Harris. That’s my (not) guilty pleasure. 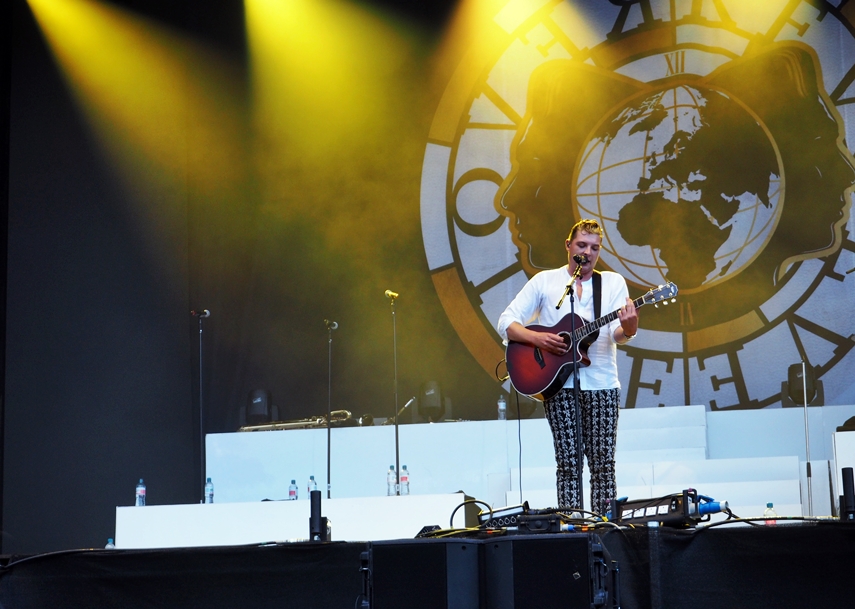 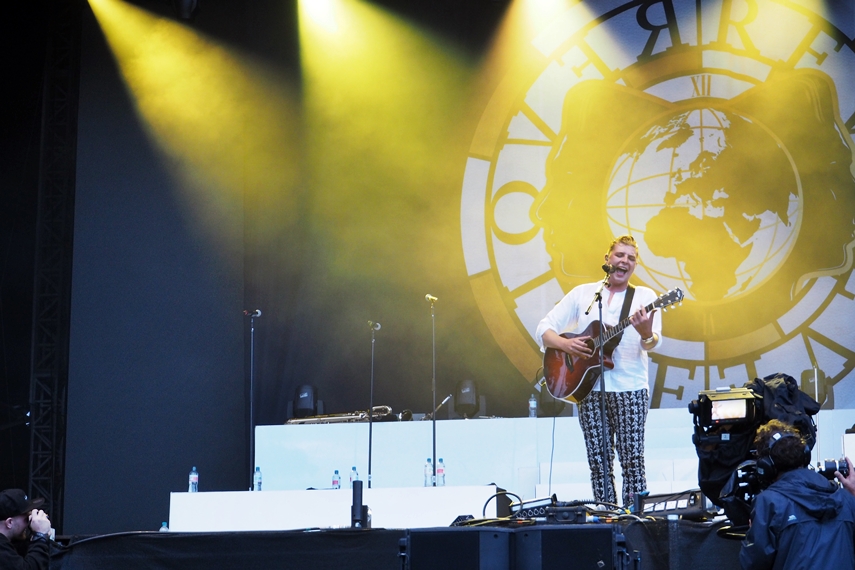 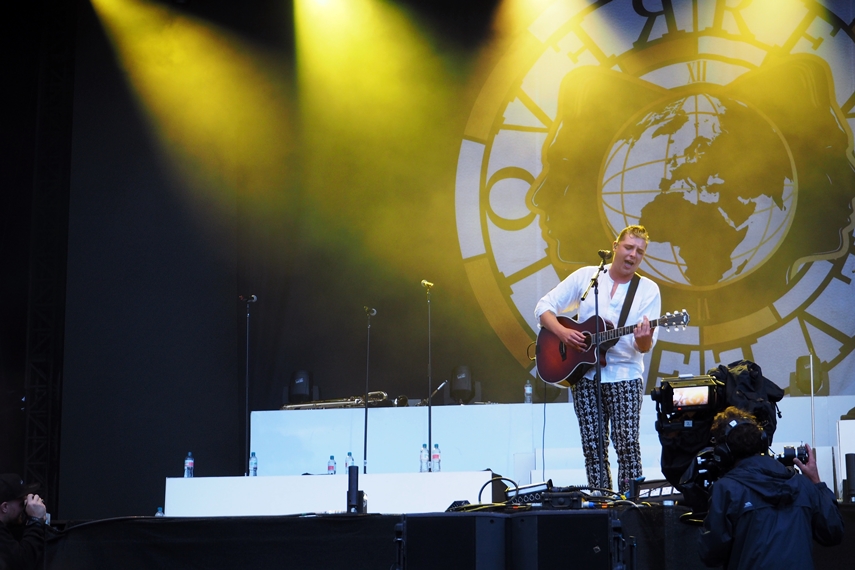 Next act was Sia.
I was totally speechless during the show. I don’t think I’ve ever seen something like that in my life before. We were quite far so unfortunately I have no pictures, but I had a good view on the screen and sound was also perfect.
She has songs that get totally inside of you. And probably she had found the best actors and dancers in the world, because what they were doing on the stage made me cry. So many emotions in their moves and their faces. And Sia is amazing person. Of course she had her wig and the camera was pointing on her just barely. I think it’s amazing as you can see that she doesn’t do it for a fame at all. She just loves music.
After Sia we had time so we went for food. Veggie burger and sweet potato fries, what a heaven!
And then last act for that day – Justin Bieber.
I was expecting everything. Seriously everything. I expected he might loose his shoe on a stage, or fall down or maybe puke on stage.
But I did not expect he’s gonna come on stage looking like a scout because of his shirt and then they probably ?forgot? turn on his sound. Seriously, you weren’t able to recognize any song he was singing. Maybe in the first rows but definitely not in the back.
I wish you could have seen all of those faces and hear the comments of fans.
,,So I have spent 200 pounds just because of Bieber and now I can’t even hear what’s he’s saying.”
People chanted “turn it on” so loud but nothing changed. After half and hour we gave up as many other people and we went back to the tent and went asleep.
I do feel a bit dissapointed as I was kinda looking forward to see him cause I wouldn’t go on his own gig and I think the new album is quite good. But also it was so hilarious that even now I still can’t stop laughing when I think about it. Everyone was talking about it the whole weekend.
2nd DAY – SUNDAY
Second day started as usual – we woke up about 8, we were chilling and about 12 o’clock started drinking. The weather was still weird and was changing every 10 minutes. It was super cloudy or super hot and sunny 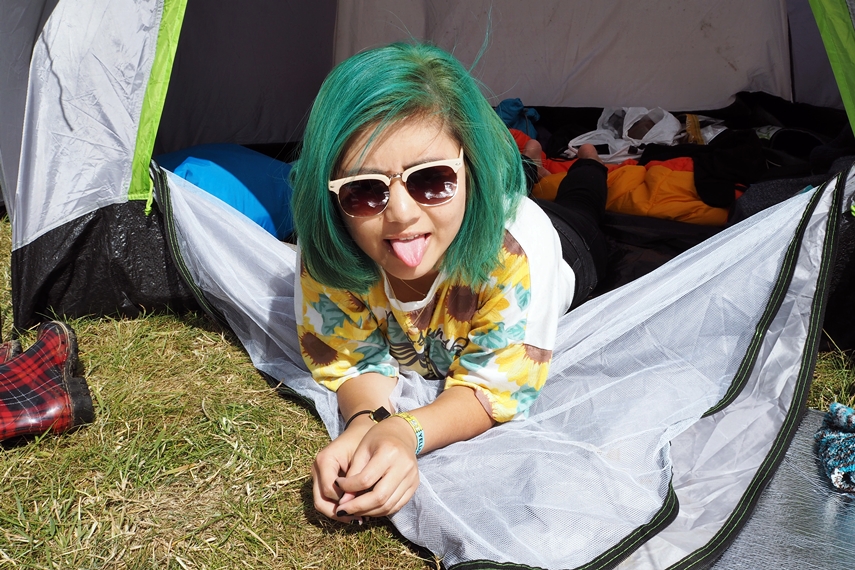 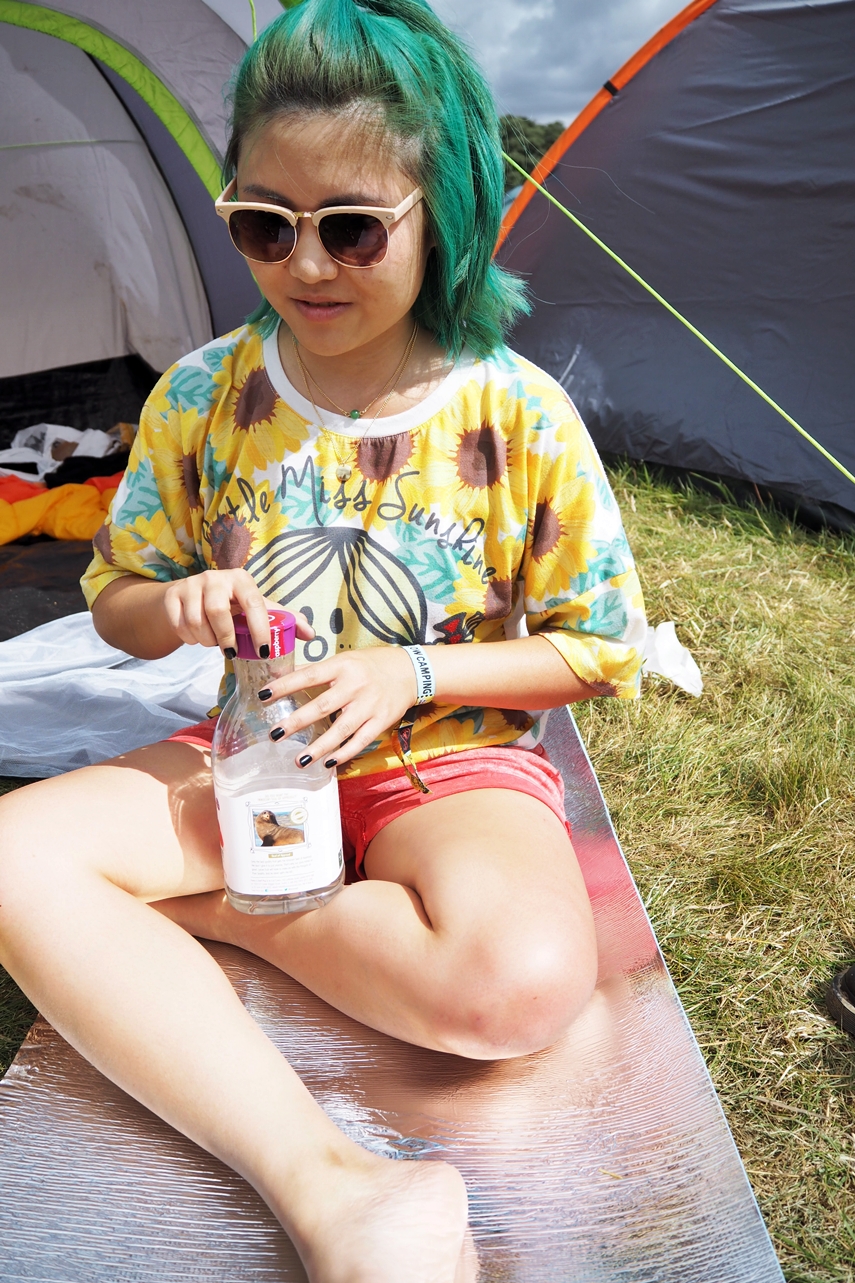 It was the day when Jake Bugg was playing so of course I had to wear his t-shirt as the greatest fan.
Which is another thing I had noticed about V festival. No one was wearing any band/artist t-shirt. I was probably the only one who was wearing one. On Reading every other person has a t-shirt with a band even though the band is not even playing on that festival. True music lovers. 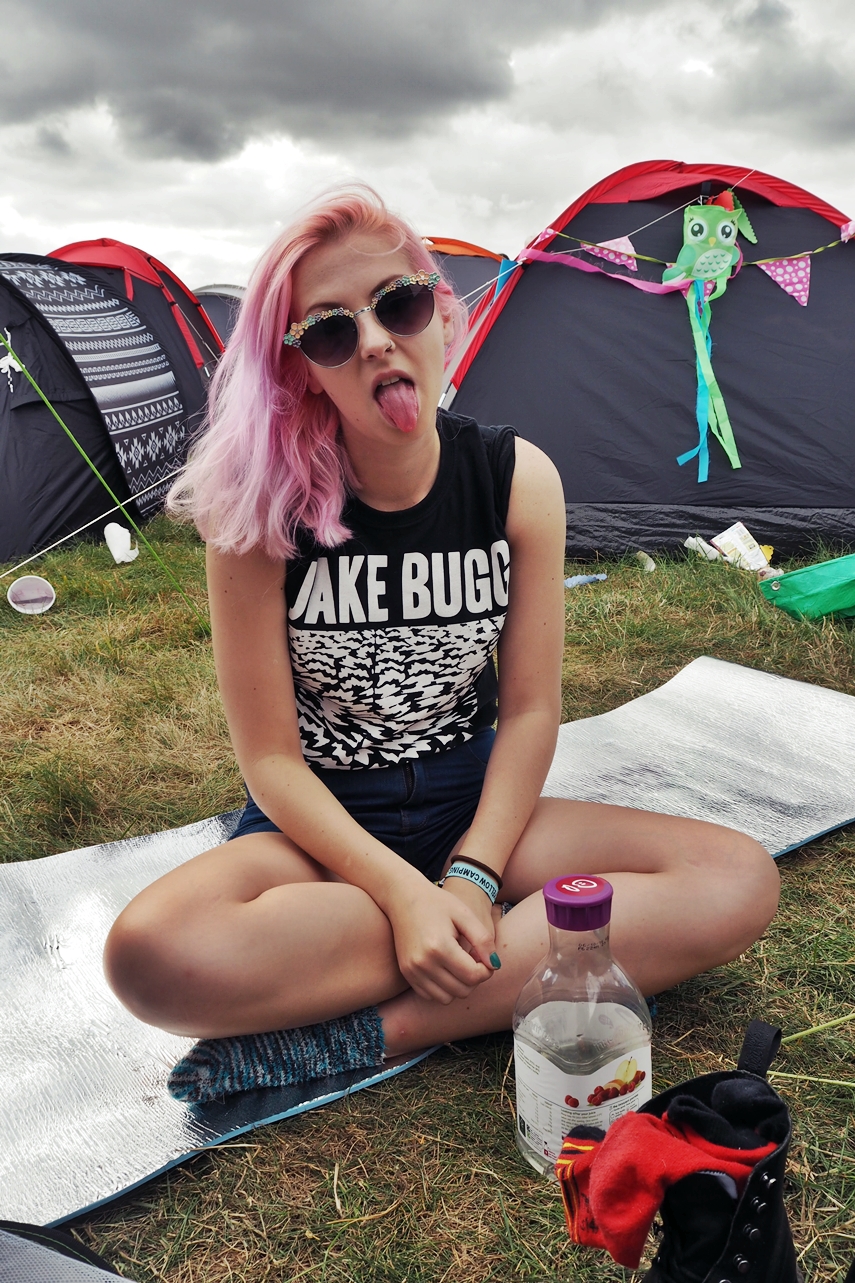 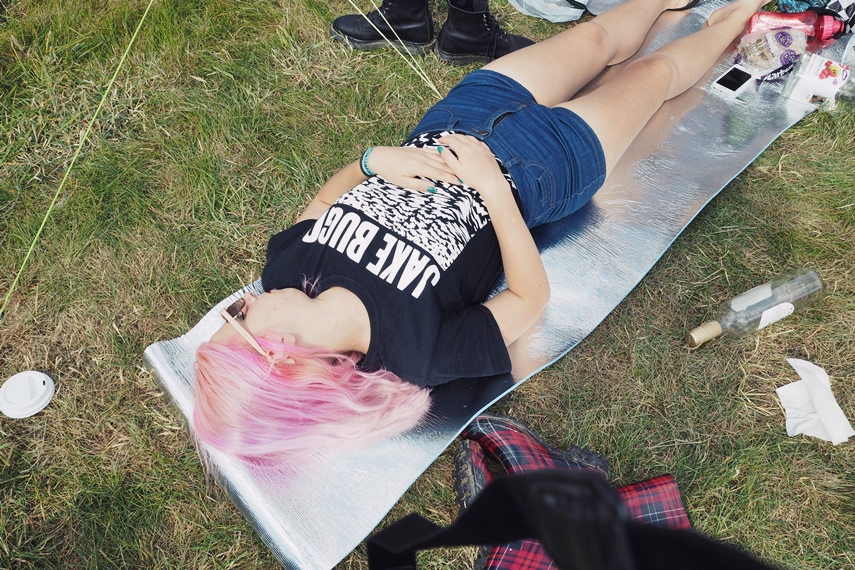 First act we went to see was Example. I used to listen to him quite lot and I have even seen him live before, but that’s ages ago. I’m not sure if he was just playing new songs or I forgot all of his songs, because I didn’t know any of those he was playing except the last one. But it was a really good show and he gave us such a positive feeling. Even my friend that had never heard of him before enjoyed it.
After Example we went to see Years & Years. It was my third time seeing them and I’m telling you, I will never get bored of them. Olly came on stage in a cheerleader outfit and with a glitter in his hair and he was cuter than ever. 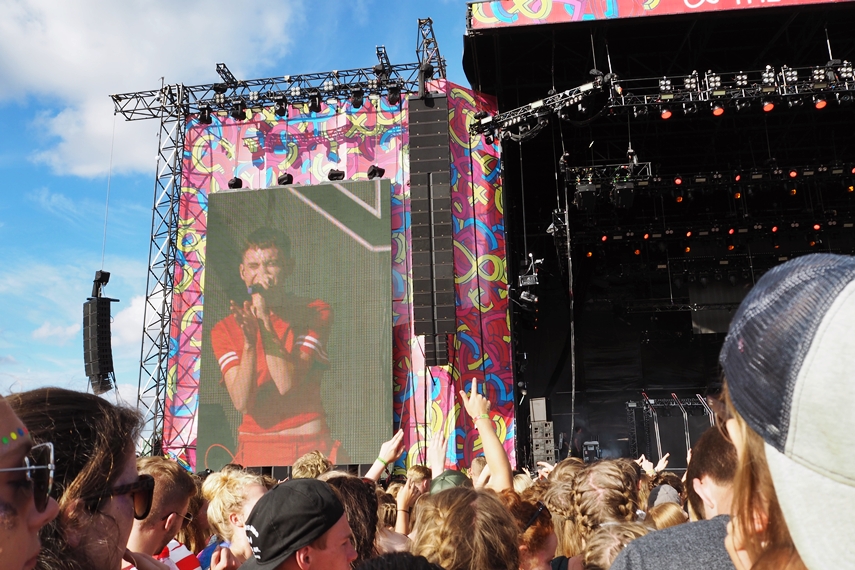 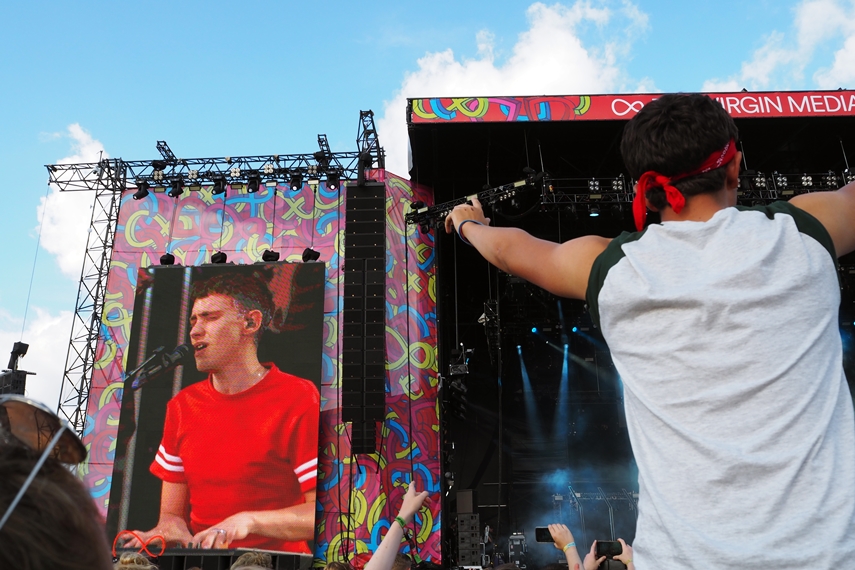 After the disappointment of their gig in Prague because of a shitty sound, this was totally oposite. Everything was perfect. Well, except the people. I don’t know what happened with the crowd, but everyone was barely moving. But that didn’t stop us to enjoy it for 100%. 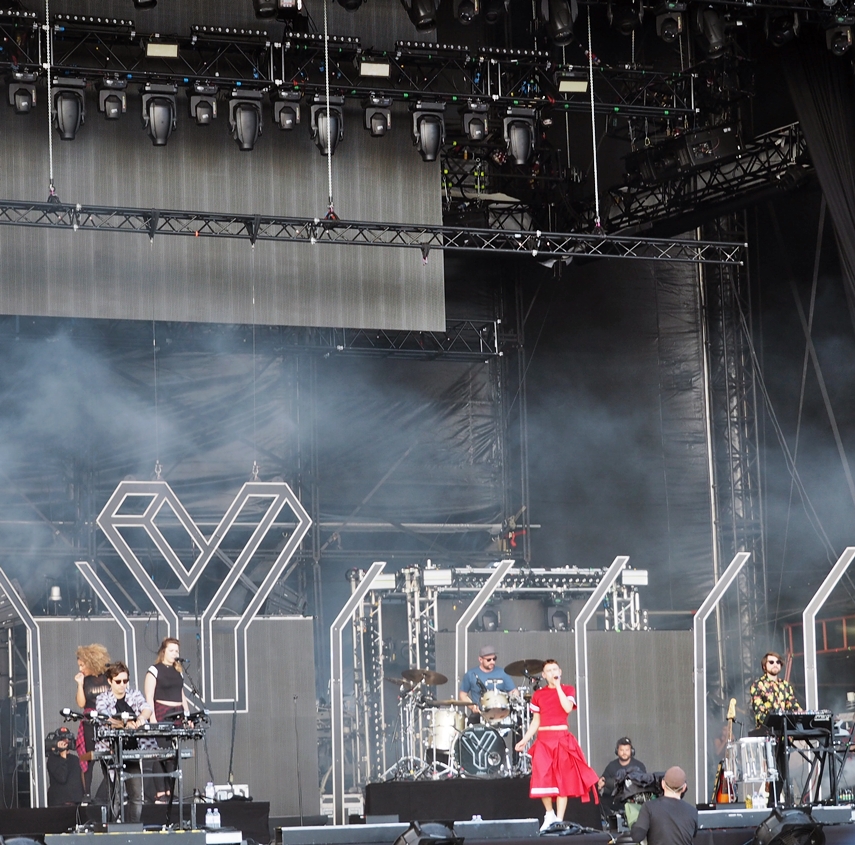 Olly even showed us awesome dancing moves with other dancers 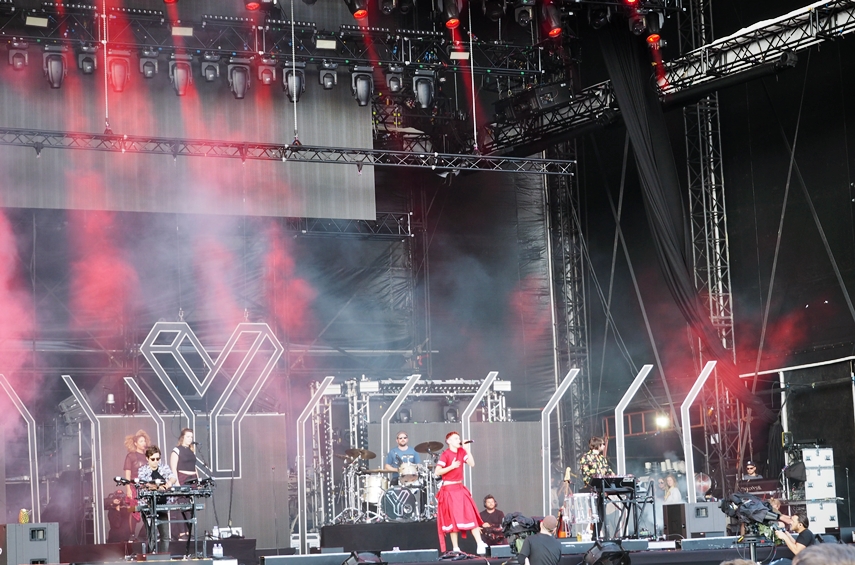 After Y&Y we went to grab some food. For me veggie burger again, haha. I just think that festivals are just for eating burgers or fries.
And then we went to sit and wait for Tom Odell. 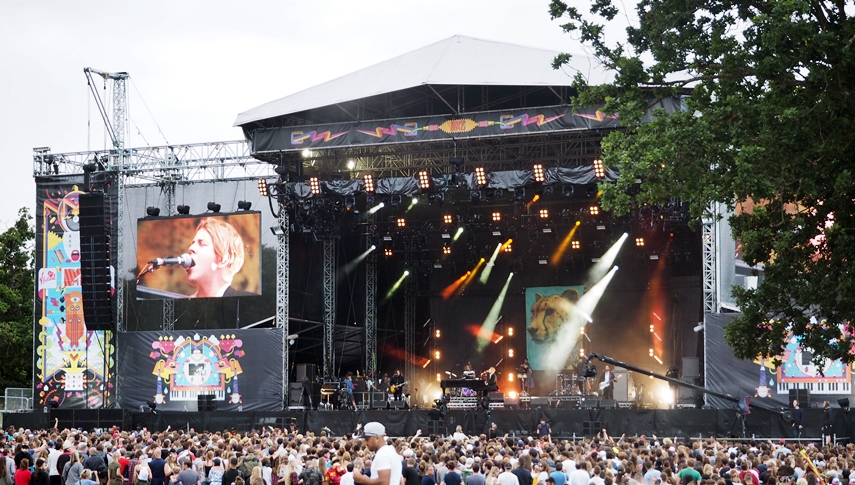 It’s been 2 years I think since I’ve seen him in O2 Academy Brixton and I totally forgot how awesome he is. 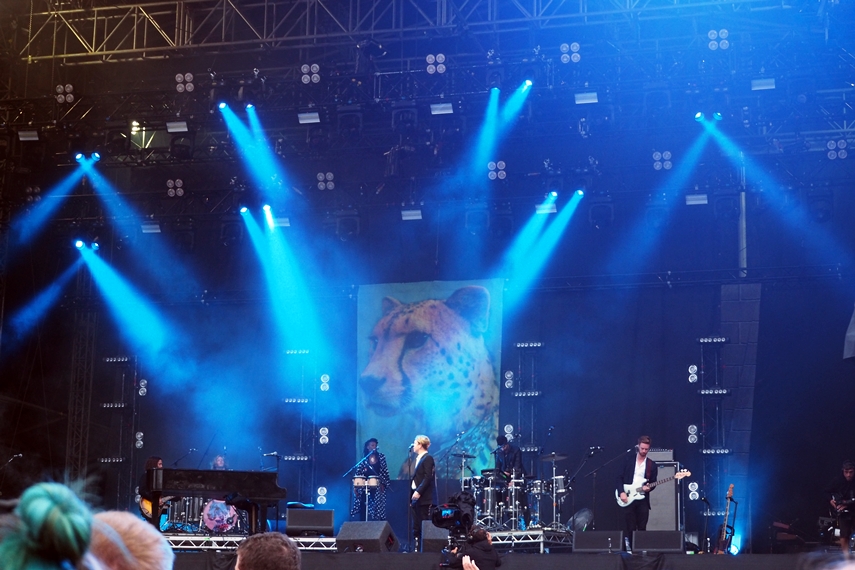 I haven’t really listened his new album but I absolutely love the singles.
It’s amazing how he can do an awesome show and make everyone to dance even though most of the time he just sits behind the piano. 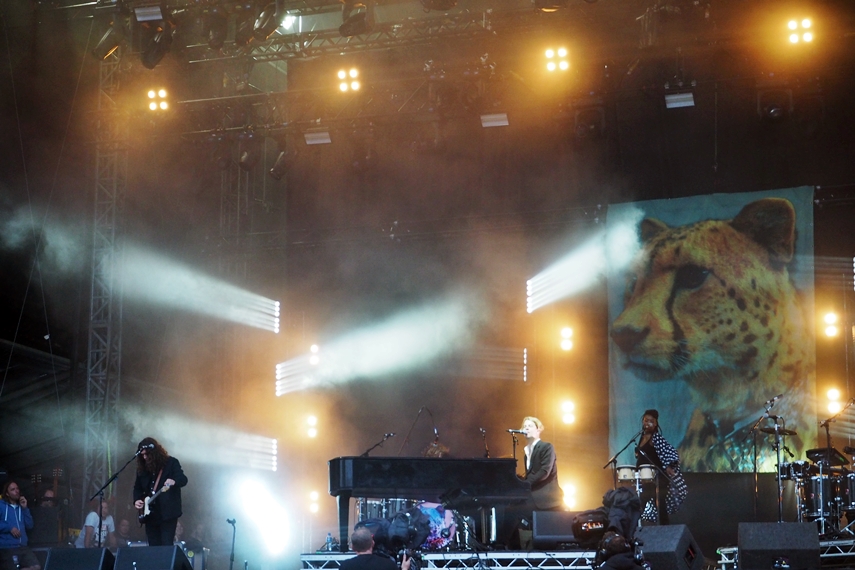 After Tom Odell it was time for my babe – Jake Bugg 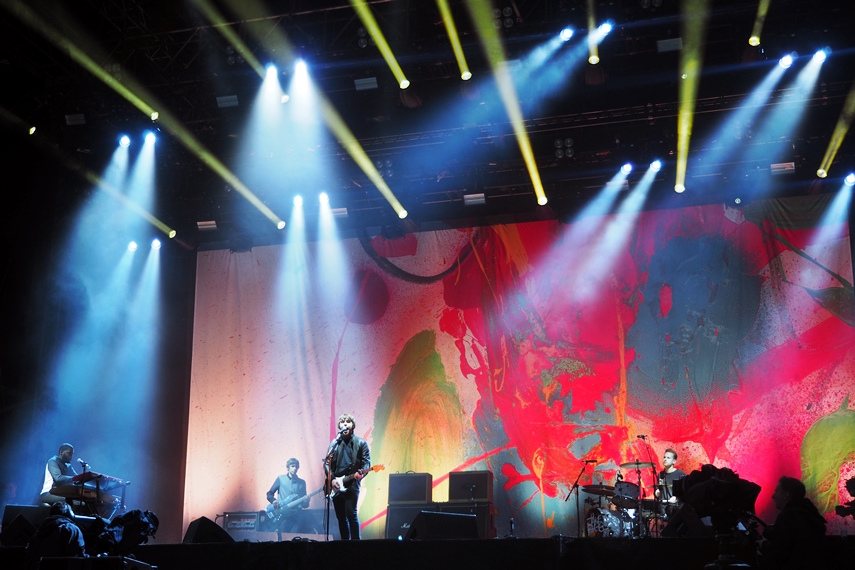 Jake is another artist I will never get tired of. It was my 5th time and I’m seeing him again in a few months and I’m still excited. I could be saying all over again how his vocals are perfect, how amazing he is when he’s playing on his guitar but it’s getting a bit boring, hm? 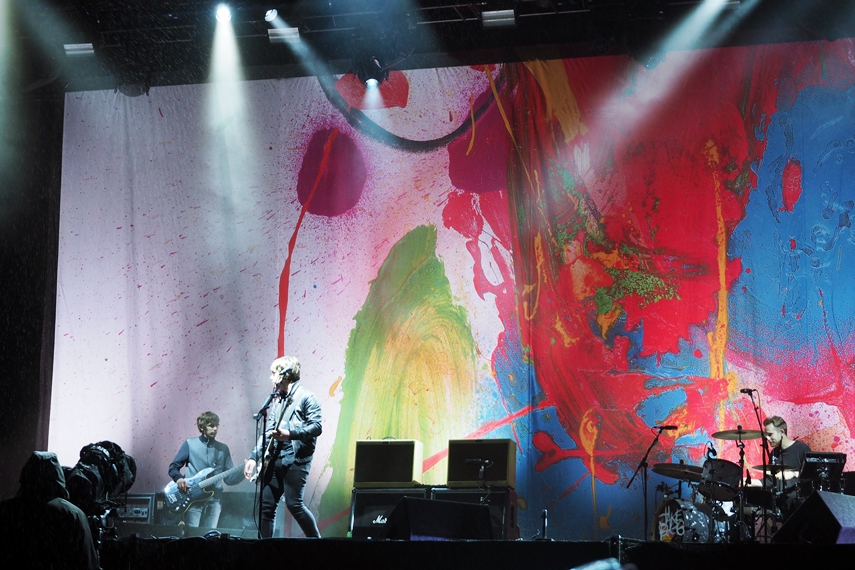 During his performance it started raining but it actually wasn’t annoying. It gave it such a magical feeling. And no one left. Everyone stayed and kept enjoying the music. 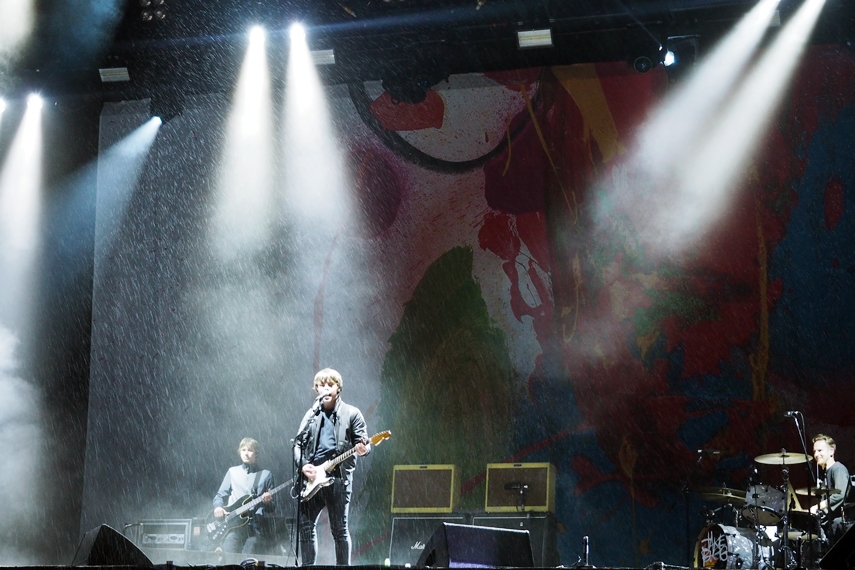 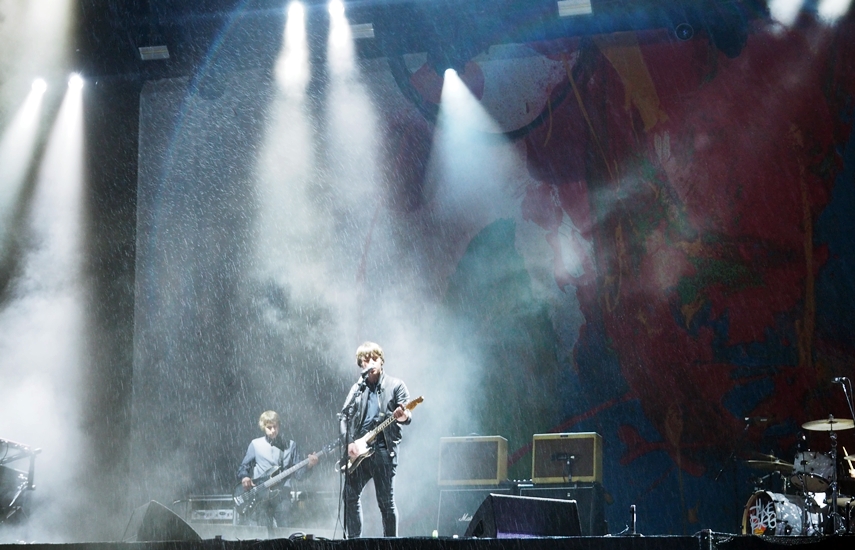 Our last act of the festival was Rihanna.
And it was the same disappointment as Justin Bieber. The sound was good, although the timing of screen wasn’t right which was quite annoying. But she kept us waiting for 25 minutes and then she came on stage with face like she’s the biggest pop star ever (well, she might be for someone). She remixed and cut all of the good songs everyone knew and everyonce danced on, and she was singing pretty much songs I personally never heard of. And after every three songs she dissapeared from stage to change her outfit and kept us waiting again. Come on, this is a festival. No one cares what the fuck are you wearing. So we stayed for 45 minutes I think and then left. For us it was just boring and it started to be cold anyway. Better be in our warm tent then be on Rihanna.
That’s pretty much how our weekend looked like. The last night was raining whole night and in the morning I woke up super early as it was raining on my face. We seriously need a new tent.
But of course after few hours it got super hot and sunny again so we packed out tent and hurray home to our beds. It was a good weekend though.