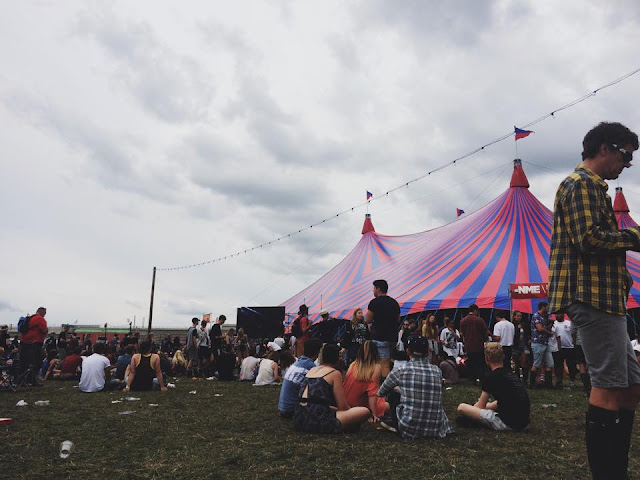 It’s been more than a week since Reading Festival and I still feel weird when I wake up in my bed in the morning instead of cold tent and also it feels weird not getting drunk at 11am and then spend a day by seeing my favourite bands.
I really miss that kind of life. Reading was totally awesome. It was my first year and I’m sure I’m going again next year.

So let’s have a look on separate days. What I saw and how was it.

This is a day we had arrived. Our bus was one hour late so we got to Reading about 8pm. In this time it wasn’t easy to find a place for a tent. Also most of the day was raining so there was a mud everywhere. So we ended up in the White Camping which is the one most far away from the Arena. It’s about 30 min. walk. But otherwise we found a good spot there. Not too far away from the toilets, but also not too close. And it wasn’t that busy, so we actually got some sleep at night.
But the first night for me was total hell. It was so cold and I just couldn’t sleep as I was shaking. So I think I slept for like 3 hours. But the other nights were okay. It wasn’t that cold anymore and also I was tired (and drunk) after long days. 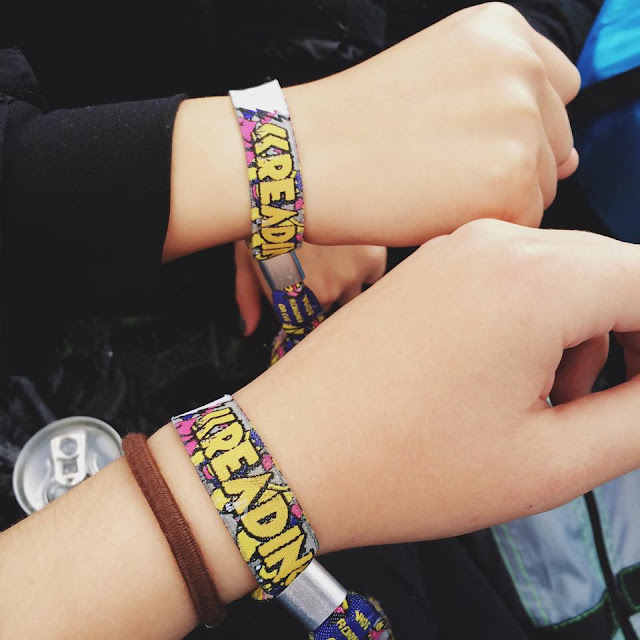 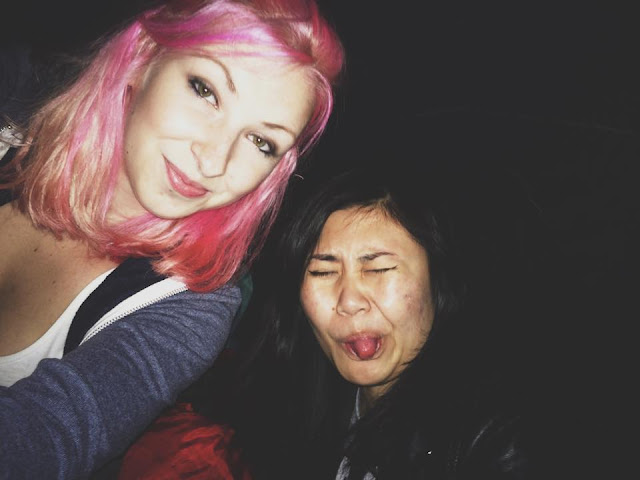 First band we wanted to see was starting at 2:40pm so we had a lot of time to do nothing and just rest. The weather was lovely so we sat in front of our tent and drank and talked. I actually burned my back. Didn’t expect that, when the other day it looked like the weather is gonna be such a shit.

So the first band we saw was Palma Violets. I don’t listen to them that much, but I know them and they’re not bad. So we sat on the grass, ate a delicious burger and enjoyed the music. 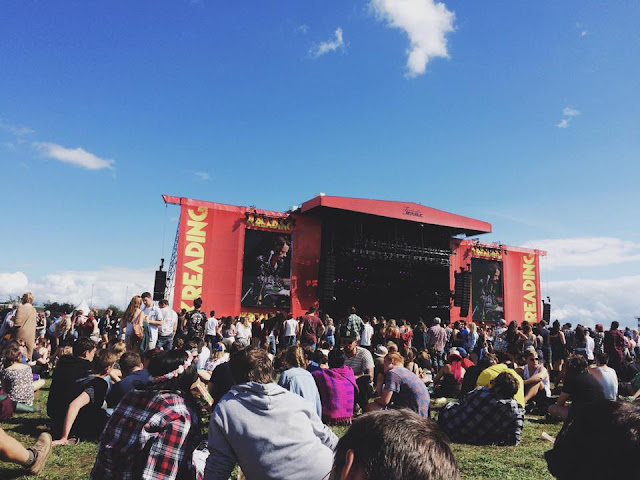 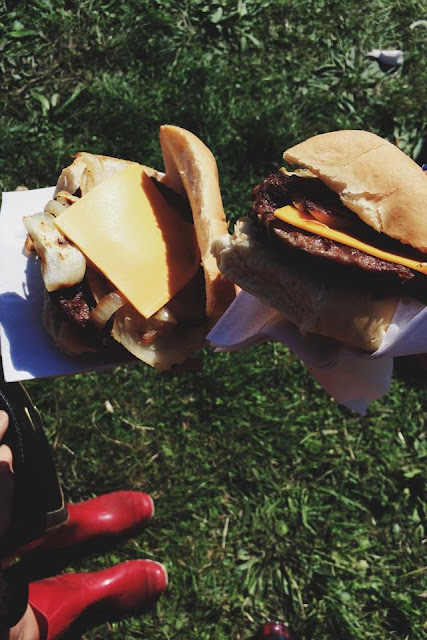 Second band was a band I was much more excited about. Panic! at the disco. I admit I don’t listen to them anymore, but I used to quite lot. You know… Emo times. I didn’t know any new song of them so I wasn’t sure what to expect. But it was really great! Who would say that after so many years I’ll enjoy them that much?? 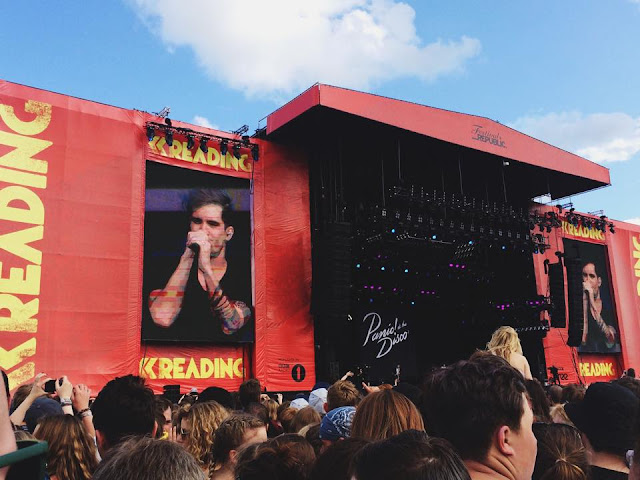 Then I went to see Don Broco alone, because my friend went to see something else. Bastille probably? Anyway I only know one song from Don Broco but it was good. But after them, Swim Deep played!! My favourites! I’ve seen them once already but I just couldn’t wait to see them again. And it was amazing. They just know how to do amazing show.

Right after them Peace played and I was also looking forward to see them, because it was more than a years since I saw them for the first time. But the crowd was so crazy. Really, Peace have one of the most craziest crowds. I wanted to hold on, but then I fell down and other people fell on me and it was just horrible. One girl even started to cry so I better left otherwise I would probably die.

I was a bit sad about it so I went to buy a beer and suddenly I was okay, haha. Btw. the price of an alcohol in the arena is crazy. £4.90 for a beer! 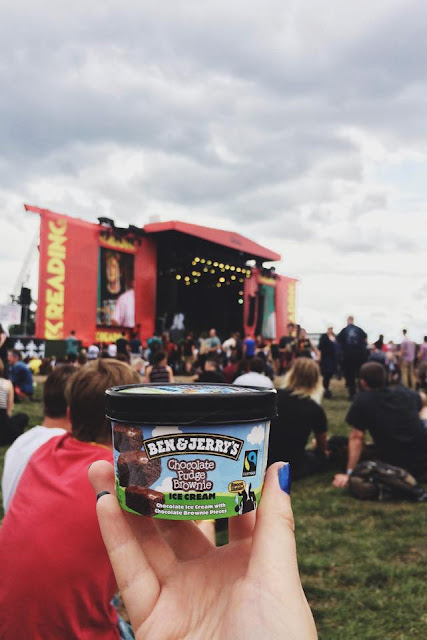 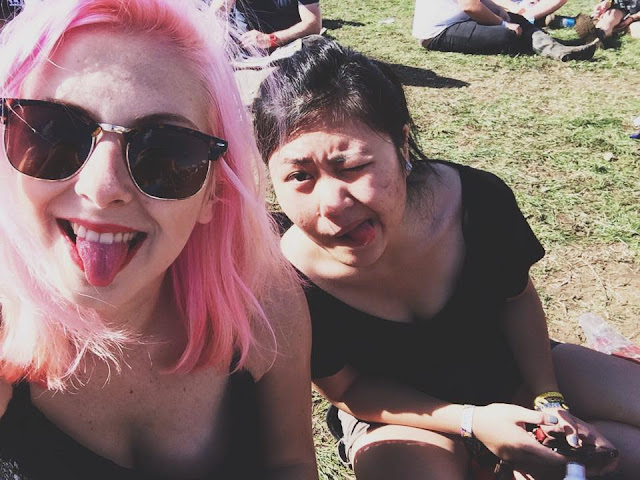 So after such a fail with Peace came time to see Alt-J! I met my friend again and we went together. We were quite far away from the stage but it was still amazing! Their music is so different and that’s exactly what I love. So we danced and felt like in a different world. 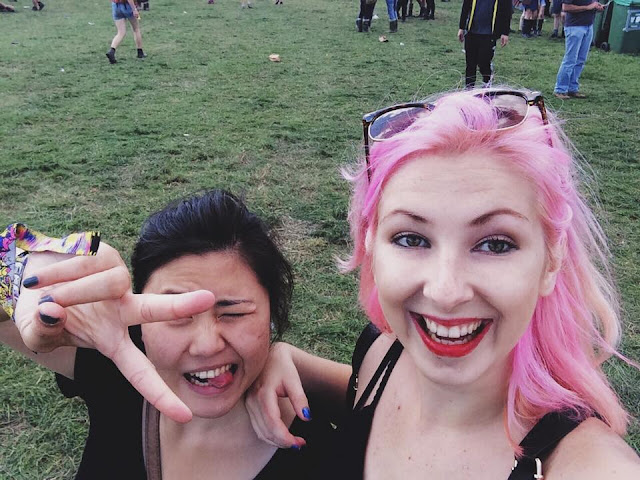 Then we went to see Simple Plan. We were really excited about it, because me and my friend used to listen to them all the time. They were one of my favourite bands when I was 13.
But then it started and it felt so weird. It was like the time had stopped for them and they haven’t changed at all. I started to think about how much I’ve changed and it all felt so ridiculous. I don’t know. Maybe I was just drunk but it was really awkward so I had to leave. I had thought I’m gonna feel nostalgic and everything but no feels like that came out.
On the other hand my friend enjoyed them a lot. She even said that she thinks it was the best performance of the day. (lol, seriously?)

So after Simple Plan we went to see Mumford & Sons. I’m not a big fan so I didn’t really care if I’m gonna see them or not. And actually it felt a bit boring for us so after like half an hour we left. We walked around tent with dance music so we went in and stayed. And actually it was a performance of Wilkinson. I had no idea until the song Afterglow was on.

After Wilkinson it was nothing more on, and it was about 11:30pm so we went to the tent and I fell asleep almost immediately. 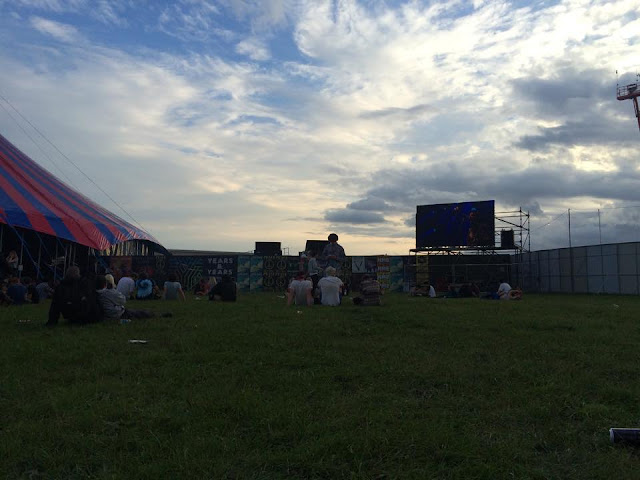 The second day had started really early for us. I went to see Nothing But Thieves at 12:00pm and my friend went to see Babymetal at the same time.

Nothing But Thieves were amazing as always. This was my 5th time and I just couldn’t be more proud of them. They were so cute and happy that they’re playing on Reading & Leeds. But I don’t think I have to mention how the crowd was boring. Like always.
When people finally start to enjoy their music? They deserve it! 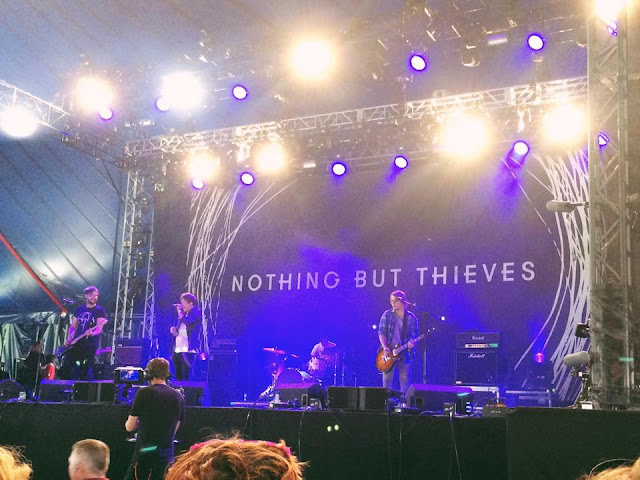 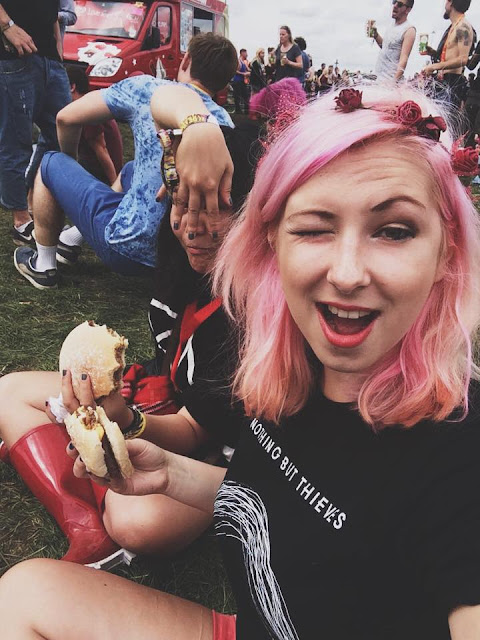 Another bands after NBThieves were Fidlar and Spector. And then there was a secret set. I hadn’t really cared about it, because I thought it’s gonna be some shitty band but then we found out on twitter, that the secret set are Foals!! I was really excited about it. Hadn’t seen them before so it was a perfect band for me. And they were really amazing. Definitely the best secret set I could have imagined! 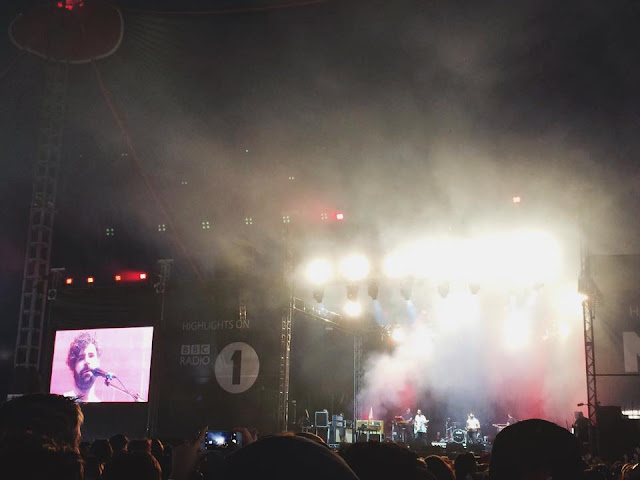 And then Circa Waves! That was my 3rd time so I didn’t really feel like I need to see them again, but nothing else was on, and also after them Wolf Alice played so at least I had a good view. But yeah, Circa Waves was great. They always have a good show and crowd is good. 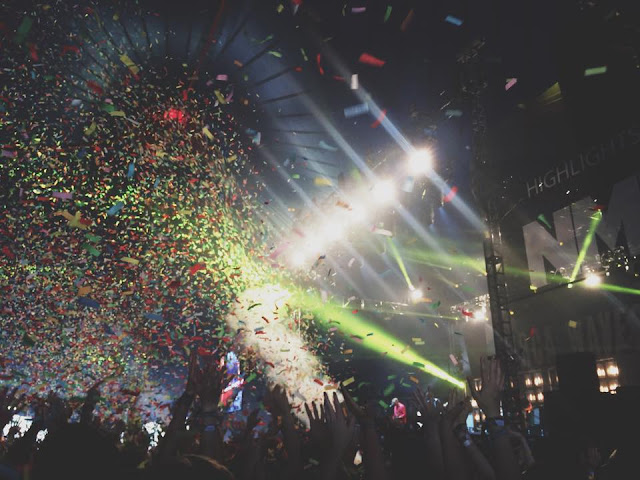 But as I said Wolf Alice played after them and that was something I was looking forward to a lot! The crowd of Wolf Alice is also really crazy. Not as much as Peace’s but still. So yeah, I fell down again but it wasn’t that bad, so I told myself I’m gonna make it and I did! They were awesome though.
Actually I forgot to mention that they had a secret set that day before their official show, but we found out on a last minute and we only made it to the last song, hah. 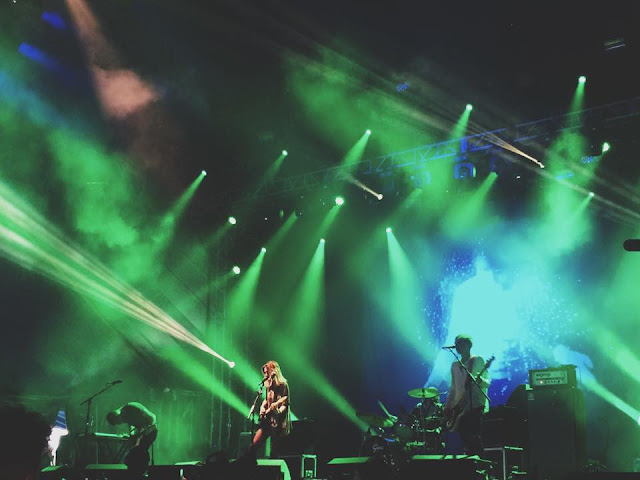 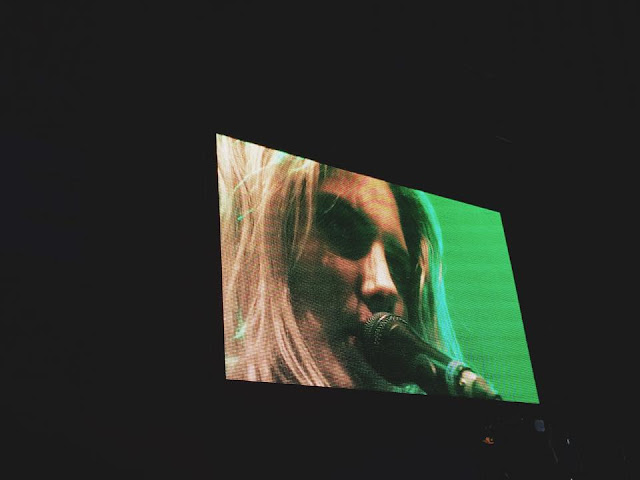 Then we saw Royal Blood, which was good but I don’t know…. I expected a little bit more from them.
But on the other hand the next band, which was Bring Me The Horizon surprised me a lot. I have to admit that I used to hate them. I’ve just never been a fan of screamo, so that’s why. But I fell in love with their new songs like Sleepwalking, Drown and Throne. So I actually went to see only these three songs and then I thought I’m gonna leave. But I was so wrong. Since the first song I loved it so much. Their show totally got me and I enjoyed even the old songs. I mean, this was really something. For me it was one of the best shows in the whole weekend. Truly amazing. It felt like they were headliners. 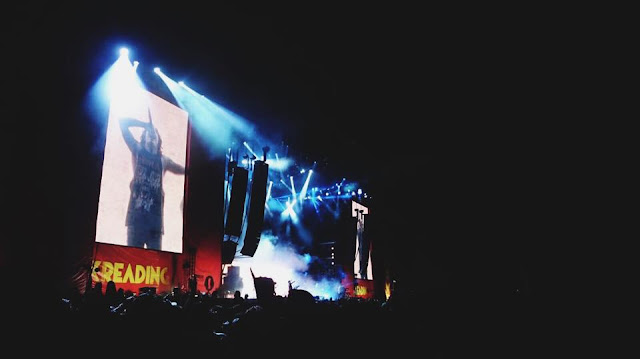 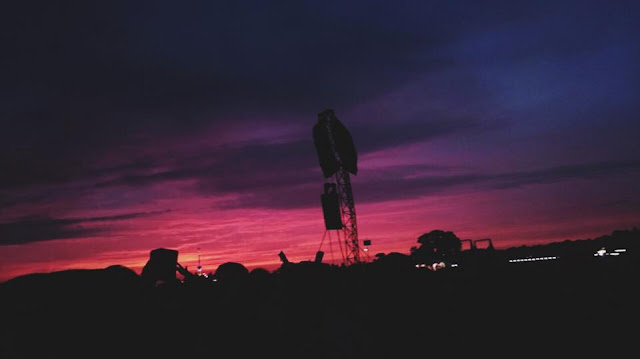 Then we went to see Twin Atlantic, but after Bring Me The Horizon everything seemed a bit boring. And also I started to be really tired. It was only about 9:30pm but it was a long and busy day. I wasn’t even drinking, which is not normal for me. But there was just no time.
So after Twin Atlantic our plan was to go to see The Wombats but I couldn’t. I couldn’t imagine myself to dance and jump so we went to see Metallica. But I was less interested about them than about Mumford & Sons so after a few minutes I had given up and went to the tent and I fell asleep in a minute like a baby. 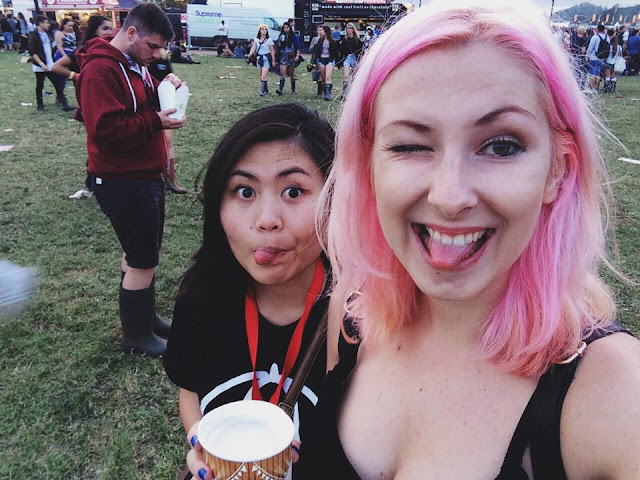 Sunday was a totally opposite of Saturday. Almost no band we desperately wanted to see. I only really cared about Years & Years at the evening. Actually I think that was one of the bands I was looking forward to see the most.
Anyway we still decided to see Awolnation, The Cribs etc. It started quite late though so it was a time to get a drink outside of the tent again. I still had a half bottle of gin which I had to finish so I wouldn’t had to carry it back to London the next day. 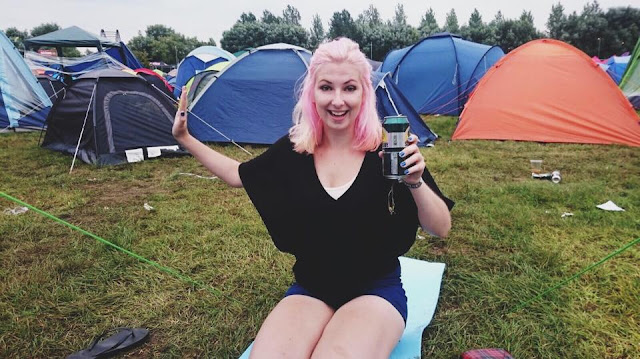 And so what happened?? Well, we drank, drank, talked with people, drank a little bit more and suddenly I fell asleep somehow. Hah, so we missed all of the bands we wanted to see before Years & Years, but nevermind. 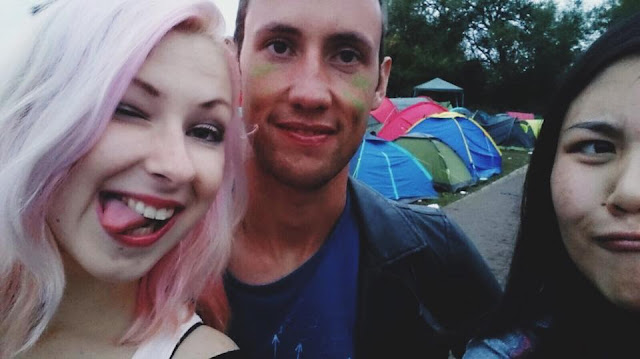 So yeah, we went to see Years & Years and it was so amazing. I wanted to see them live for quite a long time. Olly has such an incredible voice. I couldn’t help myself and I started to cry when they played the song Eyes Shut. It was so beautiful! The bad thing about that was, that they played only about 30 minutes and that just wasn’t enough! I was really sad when it was over.

Then we went to see Little Comets (which I don’t remember, boo) and then we went on some dancing show. I didn’t want to see The Libertines because I’ve seen them already.

Well, and the last day is pretty clear I think. We packed everything (in horrible rain) and went back to London. Gosh I was so tired but also sad that it was over. I was looking forward to it for so long and suddenly it was over so quick?? Anyway, totally amazing weekend!

So for me Bring Me The Horizon and Years & Years had the best shows.