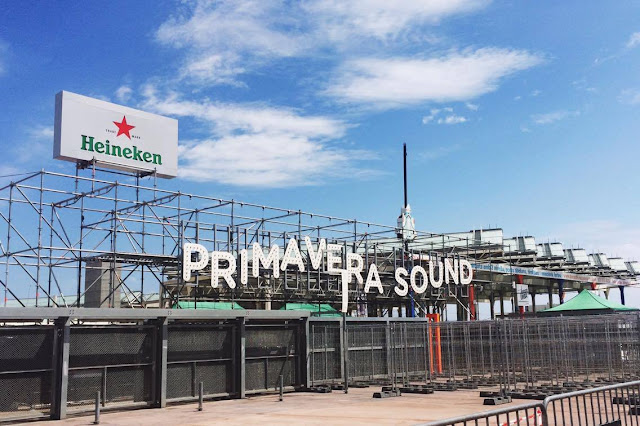 The main thing why I went to Barcelona was Primavera Sound 2016. I mean, I wanted to visit Barcelona for a long time but the decision to actually go was made after I had seen the line-up of Primavera. And what is holidays in different country without going on some festival / concert anyway?

The thing is that no one wanted to go with me and going to a festival and camping all alone is a little bit suicidal, isn’t it? But I still decided to go but just for one day. And the line-up for the other days wasn’t that good anyway. Bands I wanted to see the most were Radiohead and The Last Shadow Puppets and thankfully they were in the same day which was Friday – 2nd day of the festival.

When you say “festival” what I imagine is pretty much this – people in wellies, mud everywhere, people covered with mud, definitely a rain and people wearing raincoats…
Well, but this was Barcelona and not UK and there was nothing like that on Primavera. It was actually the opposite. People looked clean and there was literally no one in wellies. Well, why the would wear wellies when there’s no mud, right?
Don’t get me wrong, I love festival vibes but this was such a pleasant change. No rain, just sun, warm weather and view on the sea while you were listening live music. Primavera vibes are just wonderful. 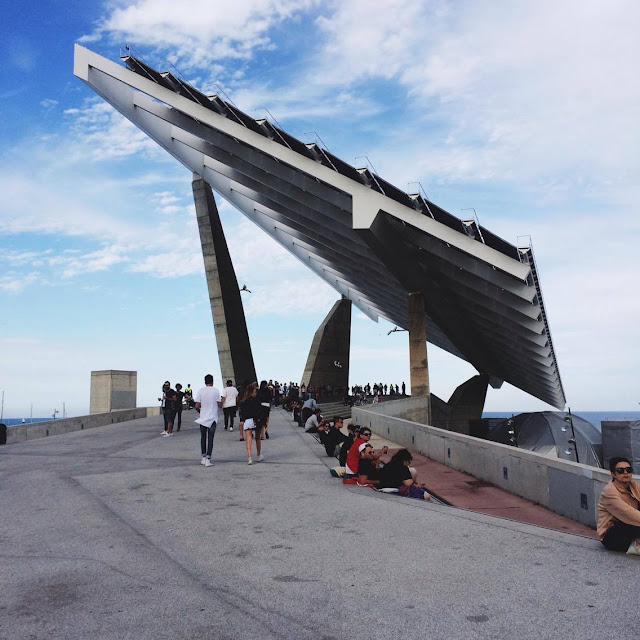 It was my second day in Barcelona so I had actually quite hungover as I just had to celebrate my first night in Barcelona. I woke up about 11am and I wanted to die. The good thing was, that the first band I wanted to see was about 4pm so I took a little nap again and then I got ready.

What was different about this festival than I’m normally used to – they were opening the area at 3pm which seems quite late. Before that no one was able to go there. Once they started to let people in, people were running for life probably to get the best spot for Radiohead. Not me though. My first stop was food and I couldn’t resist and got this delicious veggie burger. 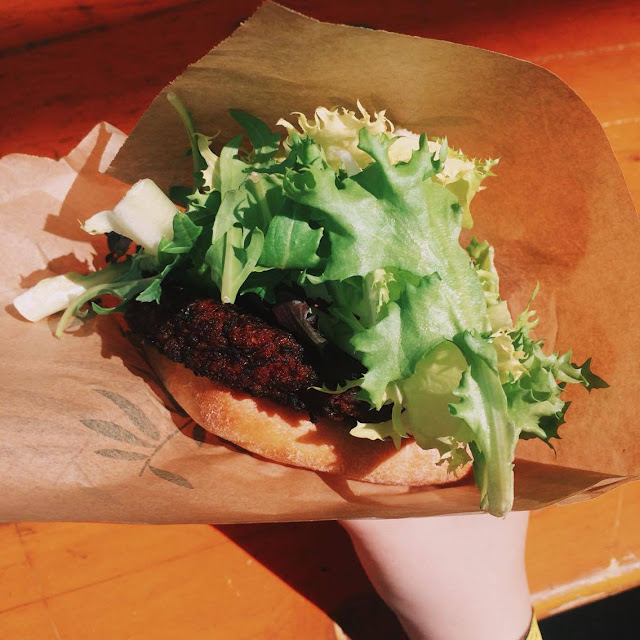 First band I went to see was Shura. They actually started about 30 min. later than they originally should have, which was a good thing for me as I got a little bit lost.
Anyway Shura was amazing! I actually hadn’t really listen to them much, I just knew who they were but since I had seen them in Primavera I’m obsessed with their music. The singer is pretty amazing. I love how cool she is and especially her hair. And her voice of course. The stage was really small and there weren’t too many people but everyone was dancing and enjoying it. And it was just the beggining of the whole day! 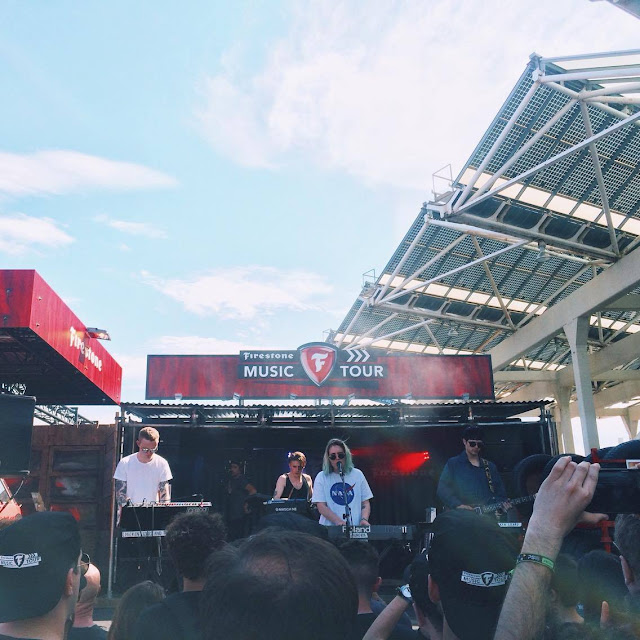 After Shura I had a bunch of time until another band I wanted to see. So I was walking around, chilling, watching the sea and just thinking. For a little while I felt quite lonely as everyone there had their own mates and I was just by myself but it wasn’t that bad how I originally thought it would be. 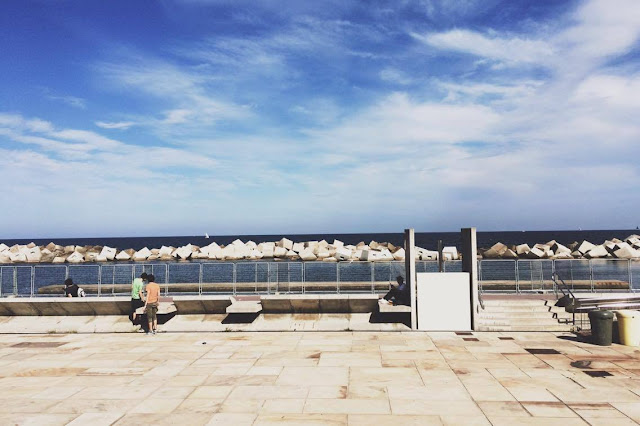 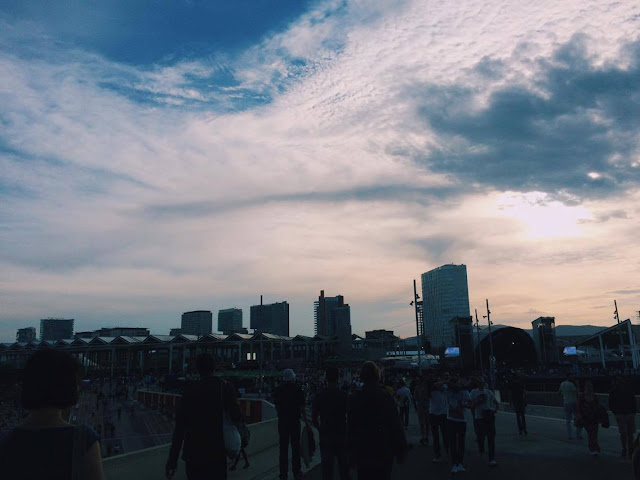 Then I walked around one stage and I saw really cool people around. Like hipsters and just different people and they were waiting for the next band. So even though I had no idea who was playing I stayed as I thought it must be something cool.
They were waiting for Alex G. I have to say I’m not really sure what I think about him. Some songs were cool but some songs were so afwul that my ears literally hurt. Just yelling into the microphone like crazy without any melody or anything? Seriously? Everyone could do that, you don’t really need a special talent for something like that.
So, I would say it wasn’t great but it also wasn’t too bad but I definitely wouldn’t put it on at my home. 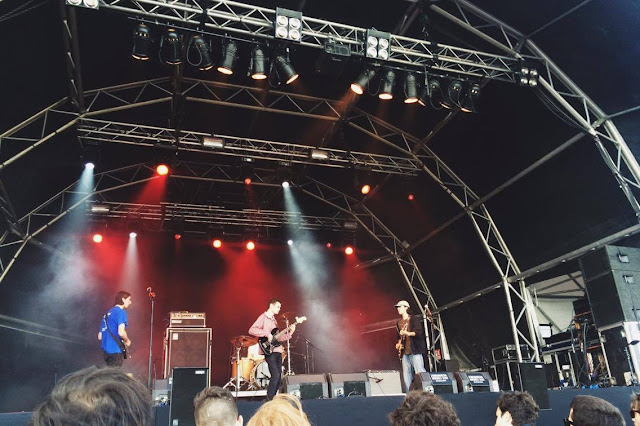 After they finished it was finally time for my next band (that was about 8pm) – Savages.
Again, not really a band I would have on my playlist but I think those girls are absolutely amazing and cool and I just needed to see them. And it definitely wasn’t disappointment. They are really inspiring, strong, independent women that are not afraid to say what they think. A lot of people came there to see them.
Jehnny Beth (singer) definitely put everything into her performance. She jumped of the stage and started crowd-surfing at least three times. I wish I was closer but thanks to those screens I saw everything. 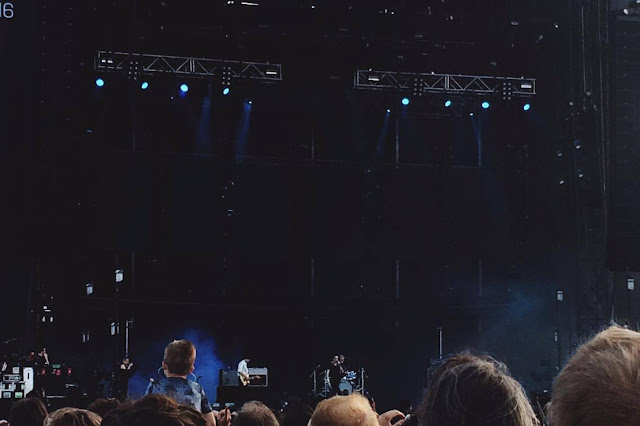 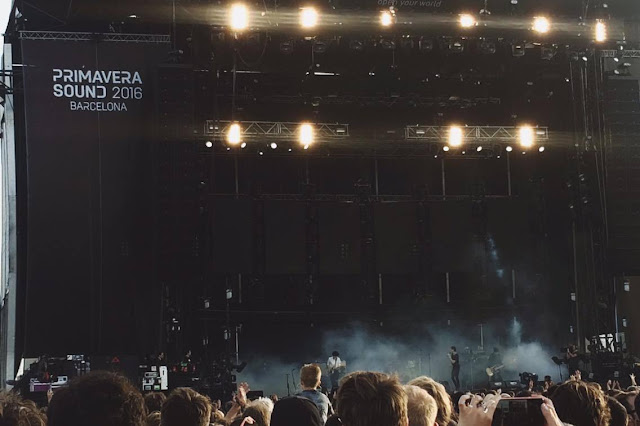 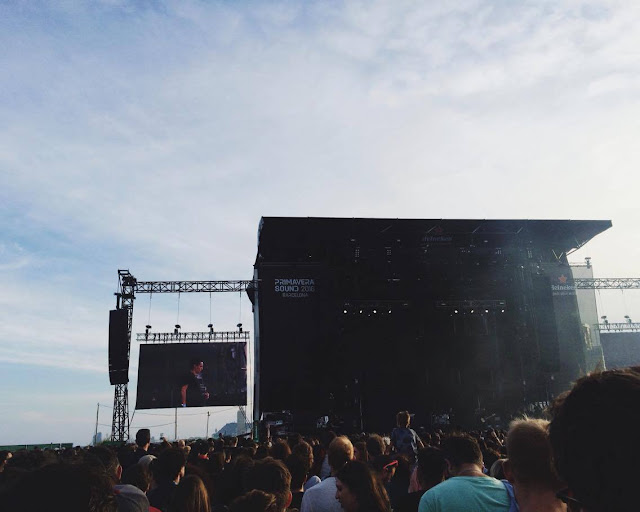 After Savages I had about hour and a half time till Radiohead so I went to grab some food again and then went waiting for Radiohead. There were so many people!! Seriously, so many.
And the wait seemed endless. 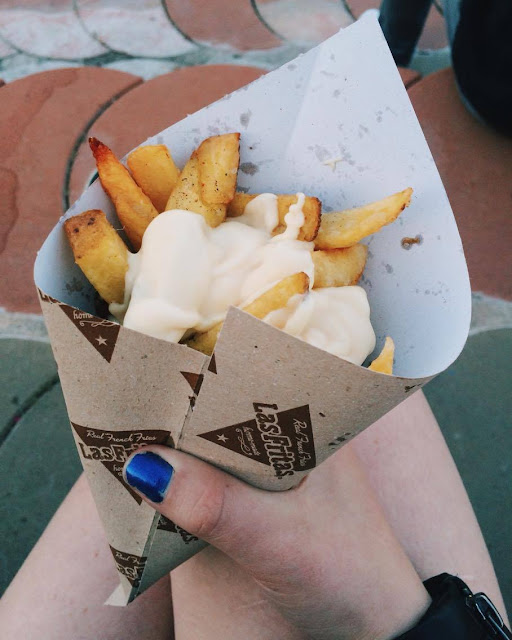 I don’t think I have to say that the whole performace was absolutely magical, but yes, the whole 2 hours they were playing were magical. But I deiniftely do not recommend to go to see Radiohead all by yourself. You can get pretty lonely. Especially if you’re lucky like me and you get surrounded by couples. I swear I never miss my boyfriend more than in that time when I was watching those people kissing and hugging while Radiohead played. 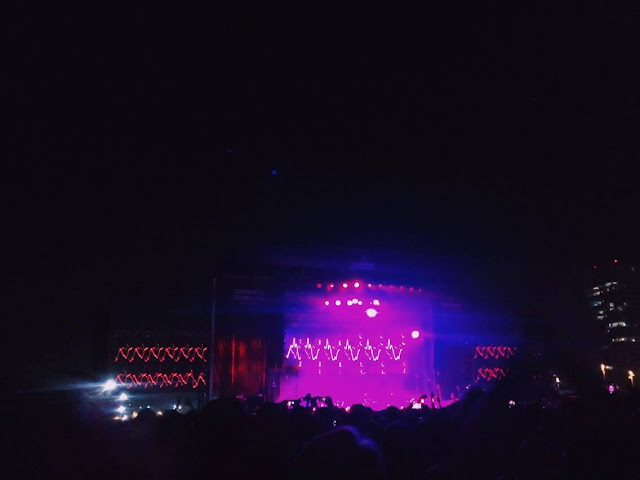 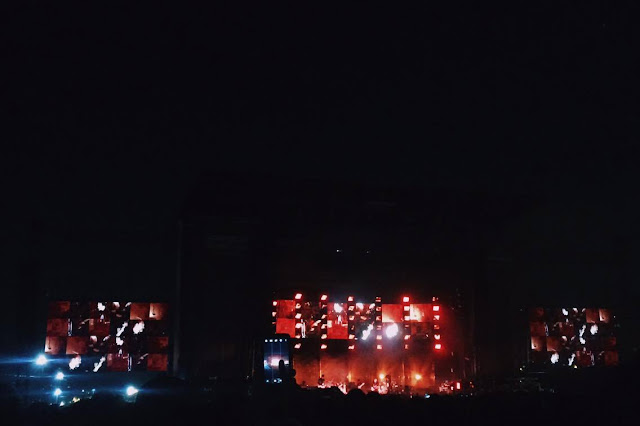 I had to catch the last tube otherwise I would have no way how to get back to the place I was staying so I had only 20 minutes for The Last Shadow Puppets. During Radiohead I was thinking I might not go to see them at all. I was getting tired, thirsty, my back was killing me and I also felt a little bit down. But it was just on the stage literally in front of the stage where Radiohead played so finally I decided to stay. And I’m so glad I did! How much Radiohead put me down, The Last Shadow Puppets put me back up! I didn’t feel alone at all. I was back enjoying the moment. 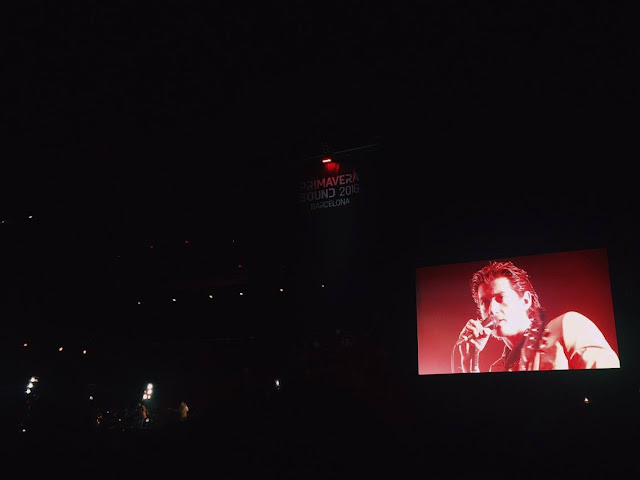 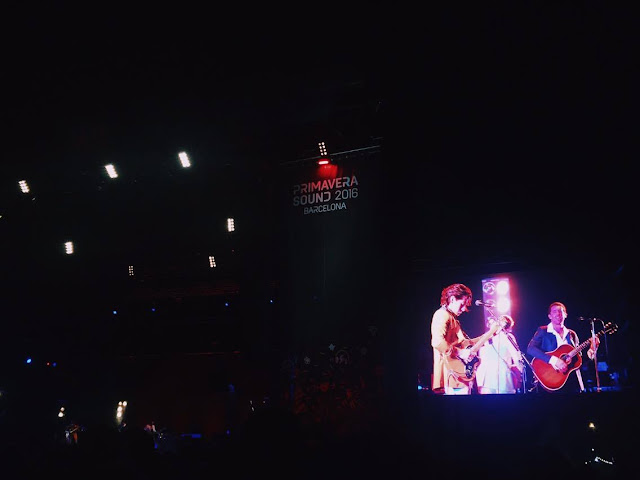 Only 20 minutes but wonderful 20 minutes. As almost every girl-fan of Arctic Monkeys even I used to have a crush on Alex Turner and even though I still adore him and I think he’s awesome and very talented he’s not my crush anymore.
He has changed a lot during last years. His ego went up, he got a bit arrogant and you can see it on the stage. I think he was already a bit drunk (well no wonder it was midnight). He was trying to speak Spanish, he was lying on the stage in front of Miles and doing weird faces etc. etc. Not really Alex I used to know. But his performance was without any doubt – brilliant. Same with Miles. I think they’re good together altough I prefer Alex with his band in Arctic Monkeys.
They played my favourite songs in those 20 minutes so when I was leaving while they were still playing I wasn’t even sad. 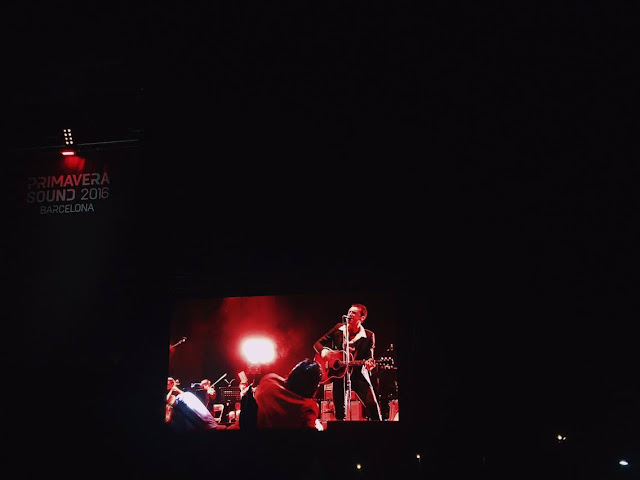 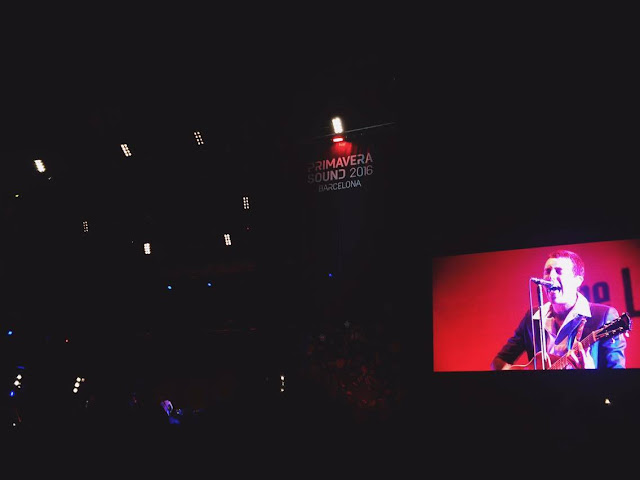 I really wish the line-up next year is gonna be good because I would love to go again!